Summer has arrived in the Oregon country! It is a time when brilliant sunshine rules the days. Join me for a new way to explore Tillamook County that will get your heart rate going and leave you with a mile-wide smile.

Nate Bell will show you to your seat when you join the Oregon Coast Railriders’ new Nehalem River run.

“The easiest way to mount up in our railrider carts is to simply back in, plop down and then simply kick your leg over. That’s the best way to do it,” noted the longtime lead guide.

Three times a day each Saturday through Wednesday, Bell and his wife, Tara Spires, lead guests on a pedaling adventure that starts in Wheeler, Oregon.

Kim Metlen designed the cars and launched his railrider business in Joseph, Oregon.

“This is the fifth year we’ve been doing this and it’s the fifth site we’ve opened,” noted Metlen. “We started out with two-seaters and now we’re doing nothing but four-seaters. We can take up to forty guests during each trip. So, if you can get up on that seat, we want to take you.”

If you’re lucky, you might cross paths with lifelong local and historian Don Best. He’s an author and video producer who knows all about Oregon coast railroading launched more than a century ago.

He said Wheeler history is alive, and you can see the signs along the waterfront: “This is where the Lewis Shingle Company was located. Right here and it was huge, with seven saws. They would bring the giant logs right here from the water up into the mill.”

Wheeler not only thrived on timber but salmon too. There were half a dozen canneries all along the waterfront. The Nehalem River railroad also carried tourists by the thousands each summer.

“You could get on the train in Portland at 9:30 in the morning and be walking on the beach at 2:30 in the afternoon,” said Best. It’s just like in the mid-west where they’d build a railroad and suddenly communities would spring up along the rail line.”

The railrider peddling experience is sublime and relatively easy with just a one-percent grade on a two-hour trip that rolls on unused track.

Bell said the best part is the lack of crowds: “We don’t get in anybody’s way because no one else is using this rail line right now. That’s what I love about it.”

The Nehalem River run shows off Tillamook County countryside that you miss driving 50 mph on US Coastal Highway 101.

Bob Waldron said it’s good to see new life for an old rail section: “Oh, there’s one stretch where you have a beautiful and spacious view of the river both up and down. It is simply beautiful and breathtaking scenery as you pedal your way up the canyon.”

So, check it out! It’s the sort of adventure that puts a smile on your face and leaves you wanting more.

The Nehalem River Run aboard Oregon Coast Railriders departs Wheeler each Saturday through Wednesday at 9am, noon and 3pm. 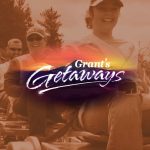 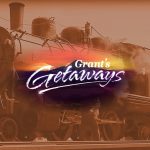 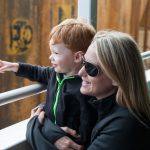 Riding the Rails on the Oregon Coast Scenic Railroad