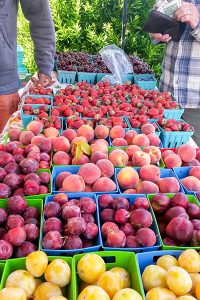 Dory Dog Days was the event of the week at the Pacific City Farmers Market and I arrived just in time for the parade of dogs decked out in costume. The beach-themed dog-float with Sophie “The Surfer Chic,” assembled by Jody and Jim Ferguson, took the prize. They were clearly ready to make the most of the waves and the sand.

Farmers markets are a great place to stop on a bike ride for a snack and to explore the local flavors and creativity. I noticed a pair of touring bicyclists quickly found the Grateful Bread Bakery booth. The Bakery is just down the street so a fresh batch of warm baguettes is brought over to the booth about every hour to replenish whatever is selling out. 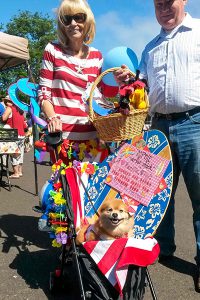 With a scone and coffee in hand I leisurely walked the 20-vendor market and found colorful fruit, met local writer Anne Sweazy-Kulju, sampled honey, and struck up a conversation with Ken Luke owner of Rainforest Natural Soap out of Tillamook. I really enjoy asking vendors curious little questions since often I end up with such interesting tidbits. Who knew you could make soap with beer, or that unlike most soaps the Fishermans bar will lather in saltwater because it’s made with just coconut oil rather than other ingredients.

Check out other special events like Superhero Kid Day (Dress up as your favorite superhero!) or the apple cider pressing and pie baking competition on Sunday September 27th. The Pacific City Farmers Market is held Sundays 10am to 2pm, June through September, at the library located on the corner of Camp Street and Brooten Road in Pacific City.