Winter steelhead: worthy of the catch Skip to content

Winter steelhead: worthy of the catch

In winter, a steelhead is at the prime of its life, with nothing but, as one fisherman pal put it, “aggression and lightning” pulsing through its veins. While a steelhead averages only between five and fifteen pounds (nothing like the 50lb. Chinook you’ll hook in fall) you’ll think you’ve got a tiger by the tail. To say that the winter steelhead is a worthy adversary would be an understatement. This fish, pound for pound, is possibly the toughest one in the ocean, and Tillamook County runs wild with them!

The Tillamook Coast’s five main rivers start filling with steelhead in December and continues to inhabit the waters through April. From north to south, the Nehalem, Kilchis, Wilson, Trask and Nestucca Rivers are all top steelhead producers. Each river reacts differently to rainfall, but once you get the timing figured out for each river after a big rain, steelhead go from a fish of a thousand casts to one knock down, drag out catch after another.

Personally, there’s no fish I’d rather pursue than winter steelhead. 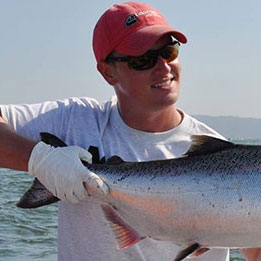 Josiah Darr has been a busy guy in the fishing industry within the last few years. Besides being a fishing guide, he also took over the sales for Clackacraft drift boats last year, so he's never too far away from the water. Josiah has also been a freelance writer for multiple fishing magazines and is currently a full time columnist for Amato Publications. Over the last few years he's been the host or guest of multiple TV shows, including AnglerWest, Hawg Quest, and Outdoor GPS. He has also been featured in many Salmon Trout Steelheader magazine. Josiah says "I've found that sharing my love for fishing and watching other people get excited about it is much more rewarding than catching fish myself."