“I was looking for something different, something our area didn’t have.”

Julie Barker has been a pillar of the Tillamook Coast dining scene for over 30 years.

She’s owned and been the chef at such local staples as Blue Sky Cafe, Bread & Ocean, and currently Buttercup Homemade Ice Creams & Chowders.

And what’s made her successful is her knack for creativity, understanding the coastal food scene, and listening to her customers.

“When we bought Blue Sky we had staff, but just by attrition I needed to go into the kitchen and I really enjoyed it,” she said with a laugh. “Eventually I got on a roll and didn’t want anyone cooking but me.”

When it came to deciding on her next endeavor after selling Bread & Ocean, she thought about the repeated questions she’d get from customers: Where’s the best chowder? Where’s the best ice cream?

“Those things are synonymous with the coast,” she said. “No one was doing either thing as a focus so I just decided the two went together. Our locals have always been my biggest supporters, and also my guinea pigs.”

Barker takes pride in using as many local ingredients as possible for her chowders and ice creams, including milk from Bennett Family Farms. She feels that comes through in the quality and taste of the end product.

“I like rustic, the best quality ingredients, the easiest procedures. I put a lot of love into everything.” 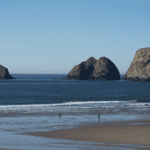