Back to Quilt Trail Overview

The Alteher/Gienger Farm was originally owned and built by John Alteher, a young, Swiss farmer. A very social and popular fellow, he met a girl who stole his heart. After building a home, he proposed to her. When she said no, he was heartbroken and became much more of a hermit. Even young children were wary of walking past his farm. He was one of the very few holdouts among the dairies, refusing to give his milk to the Tillamook County Creamery, even though it was across the street. His milk was sold to the Mayflower Dairy Co-op. After his death, his farm was inherited by an uncle in Germany. As of 2017, the property is owned by the creamery with which he refused to do business.

Jenck Farms as a 100 acre parcel of land purchased by Don “Hooker” Jenck and his wife Andrea. Originally covered in trees and tussocks, Hooker worked tirelessly to turn the land into the beautiful pastures seen today. Over the years, Jenck Farms grew to encompass 220 acres and is now run by Donnie and Joe Jenck whose current operation includes milk cows and a hay hauling business.

The Kuipers Family Farm is a Tillamook County Creamery Association member dairy farm directly off of Hwy 101 in Tillamook. The farm milks 570 Holstein and jersey cows. The large white barn has two quilt blocks: The north end showcases Windblown Square, while those coming from the south are treated to Westward Ho. /nThe farm is owned by Garritt & Sheryl Kuipers and their son and daughter-in-law Cory & Charlene Kuipers. Previous owners of the farm include Roy “Doc” Peterson, John Dyk, and Gary & Shannon Abbott. The Kuipers purchased the dairy from The Abbott Family in July 2019.

The barn was built by the Beal Family and purchased by A.J. Swett in 1939 from the Federal Land Bank. He and his family had the dairy farm for twelve years and sold it to Carl and Laverne Tohl in 1951. Dean and Patti Tohl bought the farm from his parents in 1980. The farm is currently owned by the Anker Family. The property has always been a dairy farm. This block is best viewed looking East from Hwy 101 S, near Les Schwab

Adolf and Anna (Kohler) Leuthold arrived at Ellis Island in New York Harbor via ship from Meiringen, Switzerland in 1911 and 1913 respectively. Adolf and Anna learned to speak English and became American citizens. Adolf bought the property in the early 1900s, with son Hans Leuthold taking over in 1953. Hans’ son Dan took over in 1970 and now works with his son and grandchildren. Five generations have grown up on the farm. The quilt block hangs on the oldest barn in the building complex. This hip roof structure was the original milking barn where Adolf milked 13 cows.

Many Swiss immigrants settled in this valley in the early 1900s. They claimed this area reminded them of their own little valleys in the homeland. Most became dairy farmers because of the lush pasture land and mild climate. This part of the farm has been in the family since 1999. 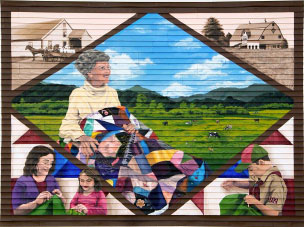 The Mural at Latimer Quilt and Textile Center

The Obrist Farm was originally owned by John Kunzi, a 1912 immigrant from Switzerland, who purchased the farm in 1914. John married in 1916 and raised three children, all who were born in the original farmhouse (now gone). He milked 50 Jerseys (a large herd at that time), and became the first Grade A Dairyman in Tillamook in the early 1950s. He worked the original 60 acres with a team of horses and also did custom farm work with his team. When Hwy 6 was built, it split the property making it difficult to farm. The barn was built in 1941 and the house in 1950. The Obrist family purchased the property in 1996, and did repairs on the barn in 1999. The milk barn is now used for calf raising.

Visit the Tillamook Area Chamber of Commerce and Visitors Center in the core of downtown Tillamook. The Chamber of Commerce is happy to share guides, maps, and information about local businesses, events, and attractions. The Chamber headquarters also has shared workspace available, and is available as a business resource hub. Whether you’re looking for directions to a local campground, need the inside scoop on local restaurants, or just want a quiet place to catch up on a few emails, the Chamber is at your service.

In 1921, a county-wide levy of $1 million was approved to acquire and build the present fairgrounds. Fair Board member R.C. Magarelle donated over 83 acres of land east of the city of Tillamook and the Williams family donated another 7.7 acres. In 1925, the County Fair was held in the new domed exhibit building and in 1926-27, the grandstand, barns and dance hall were added to the fairgrounds. Today approximately 63 acres remain. The Tillamook county Fairgrounds currently has the largest facility in the county for conventions, meetings, receptions, dances and RV rally’s.