Oregon is blessed with an abundance of rivers that offer thrilling rapids which often hide secret prizes from angling adventures.

The silver-sided prizes are called steelhead and often require anglers to endure the toughest outdoor conditions to catch them. Yet, steelhead fishermen love this time of year when cold and wet conditions rule the day.

Jim Skaar and Josiah Darr agree that if there’s a better time or place to get away from work they couldn’t say where or when.

They are volunteer anglers building a fishery future on Oregon’s Wilson River.

“Now, this is the kind of day you like to be on the water,” offered Darr. “Sun is playing peek-a-boo but there’s no rain in sight. Wow!”

“They’re just so fast,” said Darr. “Especially the fresh ones that are just in from the ocean and they are chrome bright. They’re my favorite fish that swims.”

Darr is a local fishing guide and Skaar is the retired ODFW Trask River Hatchery Manager.

Today, they’re two lucky anglers getting away from it all to support an idea that’s hitting its stride called the Wilson River Broodstock Program.

Skaar’s bobber sank without hesitation and he quickly pulled back! He was thrilled when he saw a chrome steelhead shoot through the surface like a rocket. He had hooked a dandy! 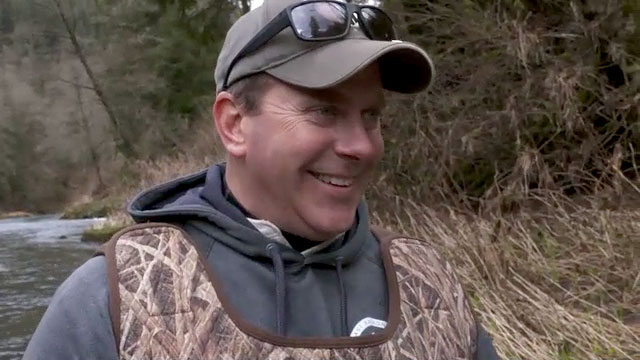 “That is an absolutely beautiful wild steelhead,” said the admiring angler. “And it’s a wild fish – exactly what we want for the broodstock program! What a gorgeous fish!”

The ocean-going steelhead is fresh from the sea and it tipped the scales at 14 pounds.

Skaar said that more than 50 volunteer anglers participate in this unique sport fishery program that began in 1997.

The volunteers use hook and line to catch and collect up to 53 pairs of wild adult fish that are kept alive in aerated aluminum boxes.

Skaar explained, “Each tank (bought and paid for by sport fishermen) has an aerator in it that runs off a battery. The tank will hold several steelhead for a few hours until the angler can get to the drop off point – a huge holding tank – that is located along the lower Wilson River.”

The Trask Hatchery crew will pick up the wild steelhead each week and transport them to the nearby hatchery.

The adult fish are live-spawned and then returned to the river so they can continue their lives. Unlike salmon, steelhead will return to the ocean and even return back to their home river again following a year or two in the ocean.

The 106 wild steelhead that the volunteer anglers collect will produce 100,000 steelhead smolts that will be planted in the Wilson River next year.

It’s a unique program that is in place in several other Oregon rivers like the nearby Nestucca and Alsea Rivers. 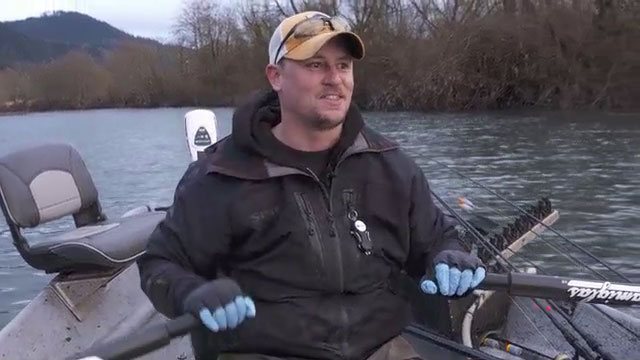 “Oh, it’s a jumper,” yelled Darr, as Jim set the hook on another silver sided steelhead. The steelhead flew out of the water several times and peeled off line from Skarr’s screeching reel.

“What have we got here,” asked Darr. “Oh, it’s a perfect hatchery fish – about 8 pounds. This is what the program is all about – a fish to take home for dinner!”

Following a ten-minute battle of back and forth, Darr smoothly slid his large net under Skarr’s gorgeous steelhead.

He held the fish and showed where the adipose fin had been removed. “That adipose fin was clipped when this fish was a baby at the hatchery. That’s how we know it’s a hatchery – not a wild – steelhead and one we can harvest.” 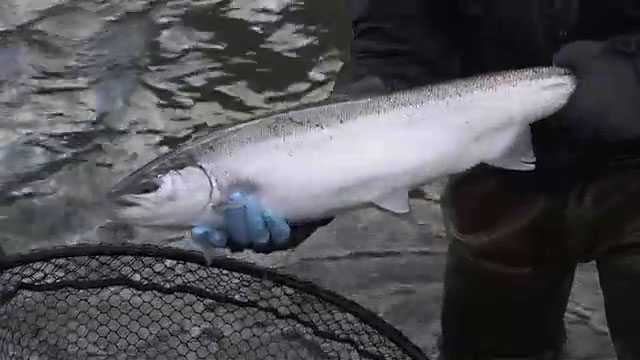 The program provides hatchery steelhead that anglers can keep in a season that begins in December and stretches through April.

Darr said volunteers are building a better fishing future: “I couldn’t think of a better way to give back than by putting fish in the tank. Three or four years from now, my kids will be catching the next generation of hatchery steelhead during the long five-month season. That is terrific!”