Life could not be grander along a getaway that lets you poke around Western Oregon from the valley to the coast and enjoy an early taste of a sweet spring!

Salem’s Capitol Mall is a rare Oregon gem: a free state park meant for strolling and where a Sweet Spring is in full swing!

You will find colorful blooms as you stroll the easy paths that also offer memorial markers for each of Oregon’s 36 counties along with the dates that they became official. 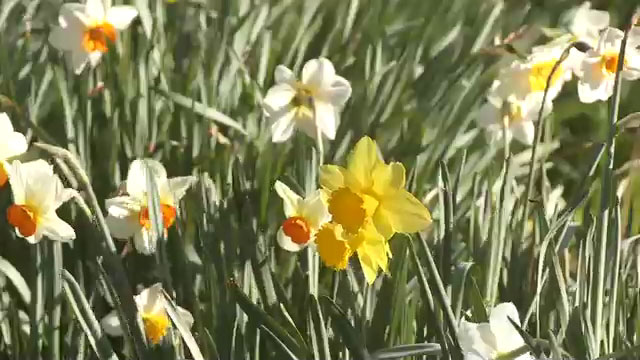 Glance skyward and see that the Capitol Mall is off to a stunning start as winter shakes off its grey-shaded coat and pink-tinged cherry blossoms steal the scene.

Mike Hoffmann called it a “highly detailed landscape” that offers thousands of varied plants and trees for visitors to enjoy:

“It’s planted to offer good color starting in spring and going thru the summer. As one of a handful of urban Oregon state parks, we are conveniently located and easy to find. It’s a beautiful place this time of year and – for me – a great office to work in. I enjoy it.”

Nearby, enjoy a heavenly ribbon of asphalt in Yamhill County – leave the Willamette Valley behind and discover the Nestucca River National Scenic Byway.

The Nestucca River sings on its way to the sea! If you travel the narrow winding roadway and pause often, you may hear its song.

Be prepared to spend some time and savor the road that threads through the heart of these mountains.

It is a back road so significant that the Bureau of Land Management designated eleven miles of it a National Scenic Byway.

You certainly won’t worry about getting lost on this scenic byway because right at the very start – at Dovre Campground – there’s a huge wooden map to show you the way– plus, it identifies several different campgrounds that invite you to make a longer stay. 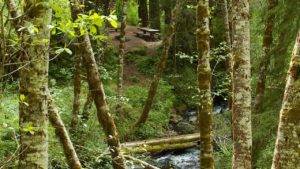 The byway’s campgrounds – like Dovre Campground – are sheltered under a cool canopy of big leaf maple and alder. There are a dozen campsites tucked away at Dovre, plus a larger covered picnic site for a possible family gathering.

But don’t get too comfy in the campground!

Soon, it’s time to trade in the truck and the roadway for a different trail.

The campgrounds can be a fine starting point that launch you onto side trips like the short hike up Dovre Creek where you can enjoy the Dovre Creek Waterfall.

It’s a stunner of a cascade style waterfall in spring and summer – and offers cool respite when the day heats up. 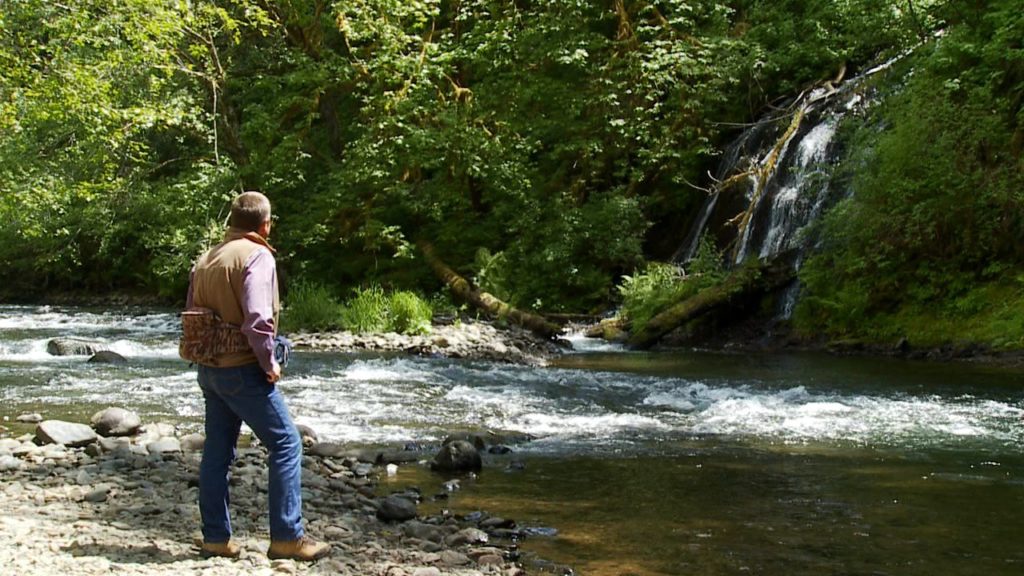 There is so much unmatched rugged beauty on this byway.

As you continue your drive west on the byway, keep in mind that the road parallels an ancient river that is marked by 40-million-year-old basalt rock formations. Even on cloudless days, they are drenched from seeping groundwater.

The water drips and drops across the lush moss and water-loving wildflowers that hang from the rock walls.

Soon, you will reach Fan Creek Campground and it is the place to be for more riverside fun – towering trees set this site apart that also offers larger RV sites for the motor home crowd.

Stop in at Alder Glen Campground for a whopper of a waterfall. 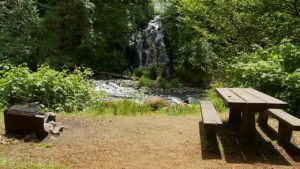 You may be drawn to the wildflowers that grow right next to even more shoreline campsites. In fact, one in particular rests just across from the namesake falls. It is a dandy campsite where the nearby falls will lull you to sleep at night.

You are apt to find me along this river on a day when sunbeams light up the scene and Fairy Slipper orchids wave you along the river as it rolls toward the sea with a magical, ageless song.

A clear sky plus brilliant sunshine add up to a March surprise: a perfect time to dive into new adventure on the quiet side of coastal life with Kayak Tillamook’s lead guide, Paul Peterson.

Peterson has been a skipper aboard large fishing boats from Oregon to Alaska, but these days he shows newcomers the perfect paddle strokes that will keep them safe.

I joined a small troop of paddlers for a trip across Netarts Bay; a small Tillamook County estuary that may suit you just fine. 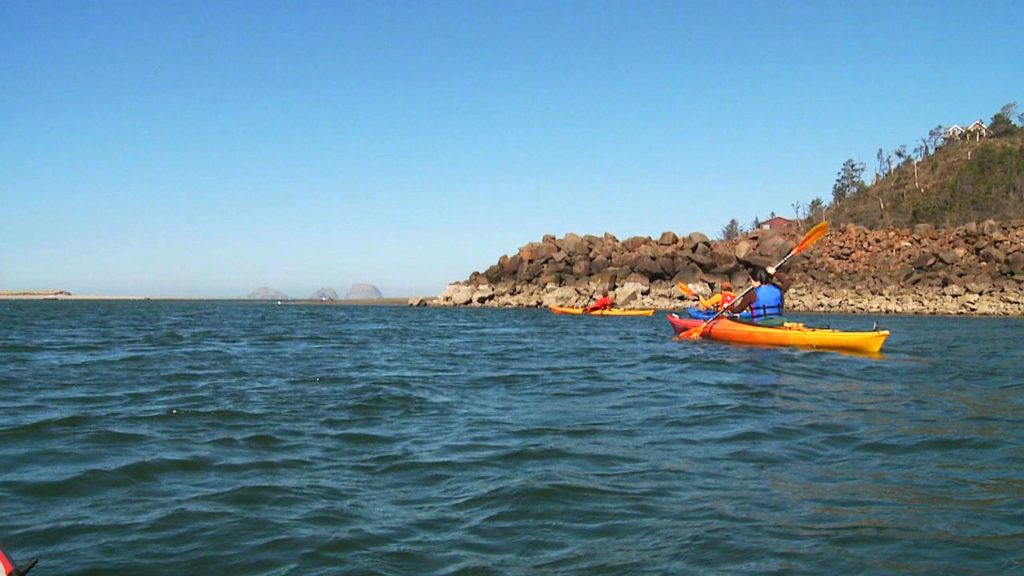 Marc Hinz co-owns and operates Kayak Tillamook and said that the twelve-foot long kayaks are akin to “beginner’s dream boats.”

“You need to know nothing about kayaking because the majority of our tours are built for beginners. If you have ever paddled a canoe, this kayak has similar stability; it’s a bit wider and more stable than ocean-going kayaks too.”

Tucked into the comfortable and stable kayak, I soon became the master of my boat as I caught on to the basic forward, backward and sweeper strokes.

Hinz carried proper safety gear that included a VHF radio and a first-aid kit, and he kept us a safe distance away from the estuary’s rough bar.

It is critical for newcomers to this sport to join experienced professionals like Hinz who know the water well, because conditions on the water can change in a heartbeat and inexperienced boaters can get into unexpected trouble.

At 2700 acres, Netarts Bay is relatively small in size with no major rivers, but several small creeks that feed into it.

“Netarts Bay is one of the most pristine bays on the Oregon,” added Hinz. “It is shallow throughout, no more than 15-feet deep and the water is so clear you can see right to the bottom. You can see Dungeness crabs crawling across the bottom of the bay, so visibility makes this a nice waterway to paddle and it is a very popular clamming destination too.” 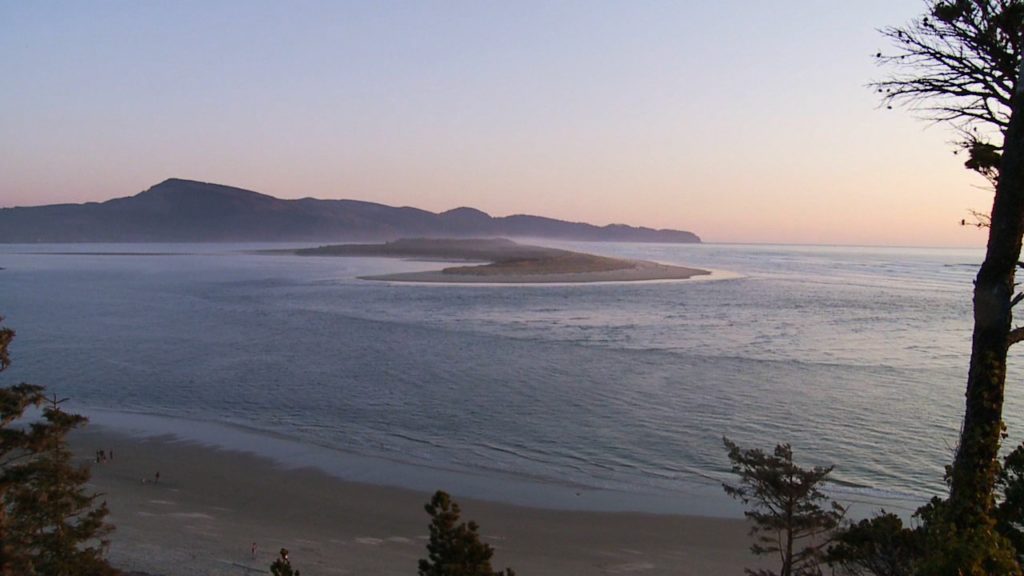 Kayak Tillamook’s tours reach across six Tillamook County estuaries, rivers, sloughs and backwater areas: “That’s about 800 square miles of flat-water paddling opportunities,” noted Hinz. “Most of which are tidal influenced, but we also have lakes; freshwater lakes and intimate little sloughs that wander up into coastal forests. There’s a lot for us to see and do in a kayak.”

There’s even more too! Hinz offered me a copy of the Netarts Bay Water Trail Map. It’s a hands-on guide that was produced and published by the Tillamook Estuaries Partnership.

The guide is free and available to kayakers and other boaters and it is part of a series of water trail maps that detail many of the Tillamook estuaries including Netarts Bay.