Tillamook Coast, native willows are awakening from their winter dormancy, and already are beginning to bloom.

There are at least four species of native willows in the area. These shrubs and small trees are dioecious, meaning there are separate male and female trees, with different-looking flowers.

First the buds swell and break, exposing the developing catkins inside. These are covered by silvery fur: the Pussy willows. Under the fur, the catkins are composed of numerous tiny flowers, packed tightly together. On male trees, these sprout thickets of yellow stamens, with nectar glands below. Females produce catkins stuffed with miniature flowers, each composed of a pistil, an ovary, and nectar glands. Pollination is by insects (and probably hummingbirds) attracted to the nectar.

In a given thicket, the individual shrubs tend to be on different schedules: one will be fully flowered out, while the next still has unbroken buds, and the next is in the pussy willow stage. As a result, the blooming season tends to stretch out for several weeks from late February well into April.

Warblers in the Willows

Because willows host large populations of insects, they also are magnets for insect-eating birds.

This time of year, blooming willows are among the best places around to look for Yellow-rumped Warblers, Bushtits, chickadees, and kinglets. And soon “tropical migrant” songbirds will return to the Tillamook landscape.

A good way to look for these birds is to visit willow thickets, and watch for movement. Because willows are usually pretty short, this birding can be easier than in taller forests – less chance of developing “warbler neck.”

Where to see Willows

Willows are ubiquitous in the lowlands of Tillamook County. The best willow thickets for seeing migrants (and possibly finding rarities) are ones adjacent to bodies of water or to open fields.

Good places on public land in Tillamook County include the following:

2)  Barview County Park has scattered patches of willow, primarily west of the campground.

3) Kilchis Point Reserve (Bay City) has good patches of willows that are scattered along the trails.

4)  The Western Flowway project (accessed from Goodspeed Road, just north of Tillamook) has some good patches of willow among the remnant spruce/alder stands.

5)  Bayocean Spit has a good willow/alder stand next to the parking lot. 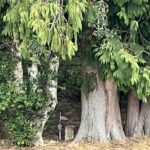