One of Tillamook Coast’s most cherished treasures is the Cape Meares Lighthouse. Tucked away amidst the natural beauty that adorns the National Wildlife Refuge and Cape Meares State Scenic Viewpoint it can be found at the north end of the stunning Three Capes Scenic Route.

The shortest lighthouse on the Oregon Coast

The lighthouse was named for Captain John Meares who was the first to sail into Tillamook Bay. It is recognized as the shortest lighthouse on the Oregon Coast. Built in 1889, this teeny tiny wonder stands only 38 feet tall and it is truly a delight to see. Don’t let its small size fool you though, the light could be seen for 21 miles out to sea because of the steep sea cliff on which it rests and due to its Fresnel lens.

Made in Paris, France

The lighthouse lens is a first order Fresnel (pronounced “Fraynel”) lens made in Paris, France. It was shipped around Cape Horn, up the west coast to Cape Meares. It was then hauled 217 feet up the cliff by a wooden crane built from local timbers native to the area.

Cape Meares lighthouse is open to visitors seasonally from April through October. The lighthouse offers free admission and is located down a slightly steep slope.

Don’t forget the gift shop and the Octopus Tree

An interpretive gift shop adjoins the lighthouse offering an assortment of local artist’s fare and affordable mementos of your trip. At the same location you will find the amazing octopus tree, a national heritage landmark. 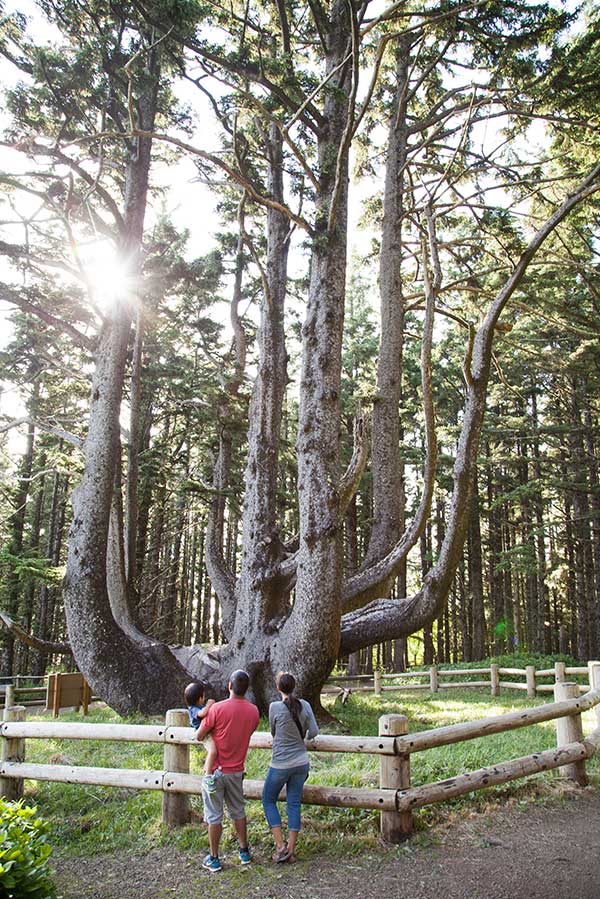 Back in the day when Freddie Graves was a child, no public roads led to...

Frequently blanketed in mystical Pacific fog, lush with moss-draped trees and rich in a variety...

A tree too big to hug: Cape Meares and its 800-year-old Sitka Spruce

The largest Sitka Spruce, and indeed one of the largest trees of any species currently...

Viewing wildlife doesn’t have to involve a strenuous hike. If you’d like a chance to...

Nature lovers, treasure hunters and history buffs will all get their fill hiking the impressive...